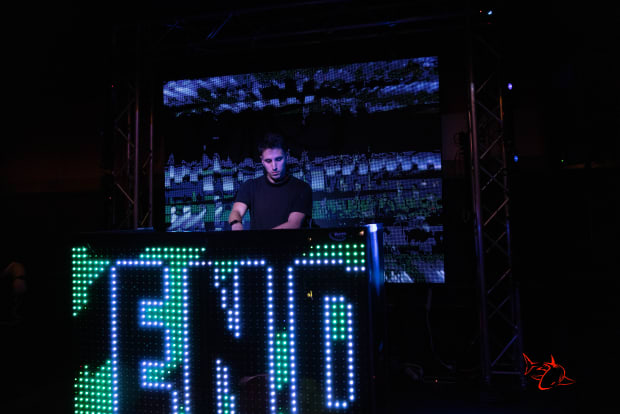 The Arizona event gathered numerous musical communities under one roof for a weekend takeover to remember.

Labor Day 2021 in Arizona was dominated by a multi-genre romp called the Endgame Labor Day Expansion Bash, a triumphant celebration that went down in Mesa with over 80 artists.

The event boasted four intricate stages, cosplay communities, and small businesses throughout Arizona, making for a diverse and vibrant club night in the Grand Canyon State. Powered by Nexstar Entertainment and coordinated by MarcTheSharkPresents (MTSP, formerly AE and DAE&NYT), the Bash coalesced the local EDM and hip-hop communities in ecstatic fashion, offering an eclectic night of music as over 1,000 attendees let loose over the course of three days.

What made the event so special, however, was its cross pollination with gaming culture. The Endgame Labor Day Expansion Bash paid homage to the venue’s video game theme and various consoles with a polychromatic, Tetris-inspired main stage designed by Marc Auger (owner of MTSP) and built by AV company AZ Party Rockers, led by Dario Varela and his staff. The stage offered immersive lighting rigs and mind-bending visuals to beautifully meld festival culture with the gaming community.

It was here where the three-day extravaganza’s EDM headliner performances billowed through each night. Renowned electronic artist CAZZETTE, Oscar Wylde of Caked Up, and more threw down, as well as stellar hip-hop performances from Suga Free, InfraRedd, and Roscoe, among others.

In a tip of the cap to Arizona’s promising horde of local talent, the lineup also featured a slew of rising local artists to show out with memorable performances. Among them were sets by Ash-B, Audacity, DJ Blown, Daytona, Dionysus, DJ James G, Dorsell Lyrics, Harmonik, and many more.

The celebration marked the first of its kind for the newly formed MTSP brand in terms of its multi-genre format, and Auger said he has many more similar events planned for 2022.