Jamie Jones’ Paradise in the Park Returns to Los Angeles 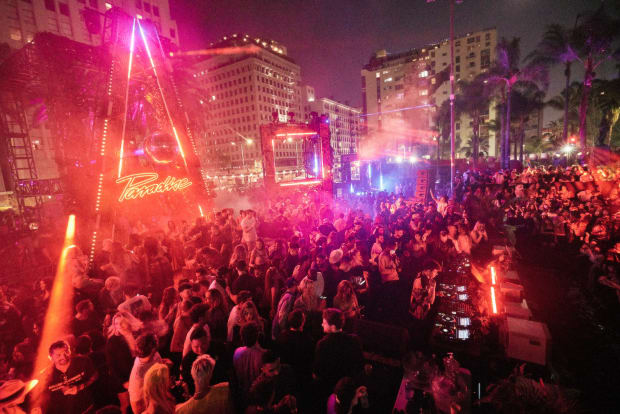 On Saturday, August 21st, Jamie Jones and the Paradise crew took over Pershing Square for an unforgettable day of house music.

Since Jones first launched the party at Ibiza’s infamous Club DC-10 back in 2012, the Paradise brand has grown into a worldwide phenomenon. Given his longstanding history with Los Angeles, he debuted the event in the City of Angels in 2017 with a sold-out show at the renowned MacArthur Park. In 2019 it moved to Grant Park for another sold out performance until its reemergence two weeks ago at Pershing Square.

Still very much in the age of COVID-19, 2021 has proven to be a year of very few festivals—especially West Coast-based ones. But this year’s Paradise in the Park didn’t disappoint.

Its state-of-the-art stage and cityscape background served as the perfect backdrop for Los Angeles house heads. The event continued Jones’ partnership with Future Primitive, best known for its unique underground electronic music events. The brand is especially renowned for picking picturesque atmospheres that perfectly embody the cinematic nature of LA.

The front of the stage was decked out with stacks of old CRT monitors, the classic boxy screens that were used before the popularization of hi-def flat screens. Half of the monitors displayed simple visuals, mostly static and sample video interface effects. Behind the DJ decks was a giant signature neon Paradise sign and a massive mirrored disco ball hanging from a pyramid trellis.

While the initial lineup included the likes of Art Department and Yulia Nikio, Sohmi, Serge, and Amémé excitedly took the stage to entertain house music fans. Attendees showed up in droves dressed to the nines, wearing some of summer’s hottest fashions. In the evening, British house DJ Hot Since 82 threw down a vibrant and dynamic 90-minute set before handing the reins over to Jones.

Jones threw down an eclectic and upbeat mix of tech house and house. His sets are consistently easy to dance to, which helps make him one of the best DJs on the planet, and his Paradise 2021 set was no exception to the rule. Performing a lengthy set, the highlight of the night was when he dropped a remix of Kid Cudi’s “Day N Night.”

After the end of the event, Jones and the Paradise gang unexpectedly transitioned the party to Hollywood’s Sound Nightclub to continue the party. Jamie Jones shows no signs of slowing down with performances at this week’s elrow in Croatia followed by Parklife Festival this weekend in Manchester, England.