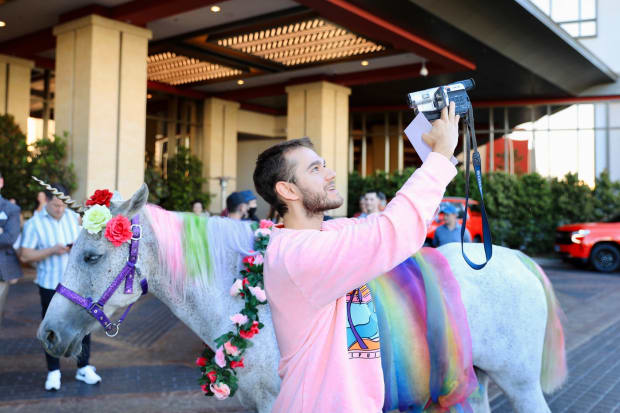 The night concluded with a performance from Zedd, where he was joined by Rita Ora, Jauz, and Madds.

Zedd said cheers to 33 in style over the weekend, when he was greeted at Resorts World Las Vegas with a surprise birthday bash to remember.

As part of his summer residency, the superstar producer has been spending his summer weekends at the new $4.3B hotel complex, but none were quite like his birthday celebration last weekend.

Zedd was taken down to the hotel in one of the crown jewels of luxury automobiles, an attention-grabbing, firehouse-red Rolls Royce. By the time the car reached the hotel, however, Zedd was itching to get out and greet the surprise waiting for him—a live rainbow “unicorn.”

We didn’t know they actually existed either, but when you’re surprising a DJ whose seen and done it all, you have to pull out all the stops. Zedd seemed equally impressed by his cake too, a decadent, towering arrangement crafted in the shape of the Resorts World hotel itself.

That night, Zedd took the party outside to the hotel’s open-air venue, Ayu Dayclub. Several artists, including Rita Ora, Jauz and Madds, were there to celebrate the DJ, and join him onstage for a performance the audience was sure to remember.

Check out the full video highlights from Zedd’s 33rd birthday celebration below.