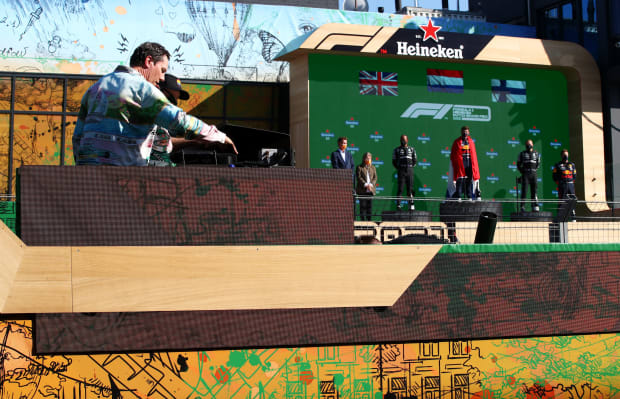 Tiësto took his own victory lap during the celebrated return of the Dutch Formula 1 Grand Prix.

Tiësto rang in the celebrated return of the Dutch Formula 1 Grand Prix live from Circuit Zandvoort, where an estimated 70,000 daily attendees witnessed all the high-octane action.

Following the podium ceremony where Max Verstappen was named the victor of the nail-biting race, Tiësto was rolled out onto the track on the back of a souped-up Heineken truck with all the bells and whistles a DJs heart desires. Like a product of the Pimp My Ride era, the truck was outfitted with built-in LED screens, pyrotechnics, and confetti cannons.

Of course, Tiësto couldn’t resist taking his own victory lap around the track while dishing out his biggest hits, including “The Business” and “Jackie Chan.” Despite hailing from numerous different countries, the hourlong performance united the orange-clad audience in celebration, keeping them on their feet and dancing throughout.

In a recent interview with Formula 1, Tiësto enthusiastically named Circuit Zandvoort his favorite race track as it’s a proud reminder of home. The occasion was particularly monumental for the venue as this was the first time Zandvoort had hosted the annual race in thirty-five years.