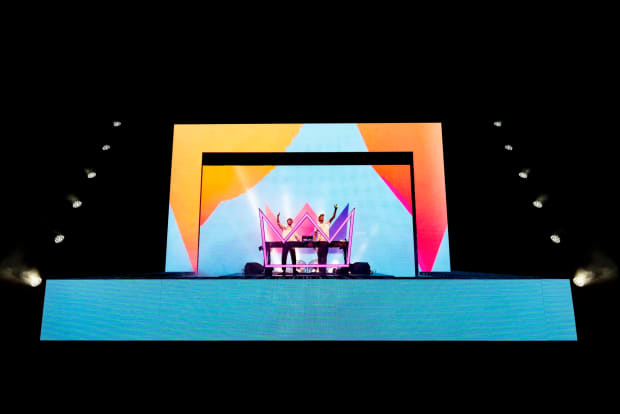 There’s nothing childish about Louis The Child’s new direction.

Kiss goodbye to the old Louis The Child.

Long known for their bubbly dance-pop anthems, like the Taylor Swift-approved “It’s Strange,” the duo have now mutated into a full-blown rave act. It’s like when the cuddly Minions transformed into the evil, fang-dripping purple monstrosities in Despicable Me.

But unlike the family-friendly comedy, there’s nothing childish about Louis The Child’s new direction.

After the duo’s recent headlining performance at Colorado’s iconic Red Rocks Amphitheatre, it’s clear the style that longtime fans are used to is gone, eighty-sixed in favor of one that foams at its mouth with rave energy. The honeyed xylophones and cutesy arpeggios that flutter through their distinct sound were dumped like sour milk and replaced by vein-popping bass and electro house music.

The metamorphosis was clear from the get-go. Robby Hauldren and Freddy Kennett of Louis The Child took the stage in unison with the drop of an unreleased track, which embodied the ethos of the young duo’s “Euphoria” tour with its soaring progressive house sound. It was something you’d expect to hear if you stepped into a time machine and emerged from a smoke plume at Alesso’s 2014 Ultra set.

In one of the more stank face-inducing moments of the performance, they uncorked a vicious remix of Daddy Yankee’s influential 2004 reggaeton anthem “Gasolina.” It took a page out of Dillon Francis’ playbook, rumbling with the quirky ferocity of one of his classic moombah bangers à la 2013. The same can be said of their unreleased remix of “Fire,” which aligned more with the midtempo mayhem of REZZ.

Despite their new flight path, shades of the sound on which Louis The Child glided to stardom were interpolated throughout.

During one particularly special standstill, they introduced a lull in the music and fans could be seen hugging and heard howling with glee—a surreal moment after over a year without the ability to party together. The duo then filtered in “Chop It Up,” a fan-favorite, blissed-out melodic trap jam produced alongside fellow Chicago electronic wunderkind Whethan, before dropping two signature songs: “hi” and the aptly-titled “Classic LTC.”

Like chameleons, Louis The Child morphed songs of old into special “Euphoria” edits as a barrage of kaleidoscopic lasers blitzed the crowd. After a spin of their time-tested future bass remix of Ty Dolla $ign’s Blasé, they nuked the track’s half-time arrangement and dropped a four-on-the-floor bomb of a house rework. Other 2021 makeovers they played included rapturous renditions of “Love Is Alive” (with Elohim) and “Weekend” (with Icona Pop).

At one point, longtime fans of electronic dance music were shocked and delighted to hear Quilla’s classic vocals from “Walls,” a seminal progressive house song released back in 2012 by Sultan + Ned Shepard. Considering they were only 15 at the time, Kennett and Hauldren’s choice to breathe new life into a long-forgotten dance anthem says a lot about their love of the genre. And it was a bold move considering the crowd looked like a TikTok convention in a high school parking lot.

Later on, in an “everyone shut up” moment, Louis The Child offered the Red Rocks faithful a treat by unveiling a hotly anticipated collab with Skrillex toward the end of their performance. The house track has quickly become one of the duo’s most coveted unreleased records since they debuted it in late July.

And speaking of treats—as if the show couldn’t have gotten any better—Chick-fil-A employees greeted attendees as they filed out, serving the chicken cherry on top of a memorable night. Game, set, match.

You can purchase tickets to Louis The Child’s “Euphoria” tour here.