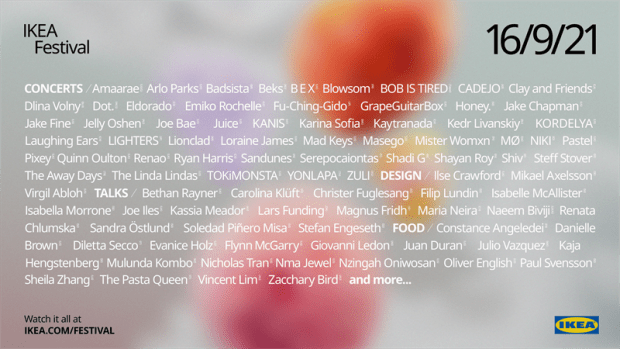 IKEA stans, hold on to your meatballs.

The furniture giant will host its first IKEA Festival on September 16th, bringing together a variety of musicians, designers, chefs and speakers for an immersive 24-hour event. Hosted for free on the IKEA website, it will broadcast from more than 100 homes around the world as participating talent transform their living spaces into virtual stages, according to a press release.

Among the musical performers for the inaugural event are Kaytranada, TOKiMONSTA, MØ and Masego, with icons like designer Virgil Abloh, TikTok influencer Pasta Queen and astronaut Christer Fuglesang rounding out the lineup. They will appear on segments like “DJ Relay,” a steady stream of club music; “Home Makeovers,” a hub for interior design inspiration; and “IKEA News,” a tour of the company’s current offerings and initiatives.

With IKEA Festival, organizers hope to encourage discussions about sustainability and global community.

“Life at home has taken on a whole new meaning for every one of us over the past year, and by being virtually connected, we can open the door to many more lives around the world – exploring how we all live, celebrating individuality and creativity,” said Olivia Ross Wilson, the Communications Director of Ingka Group, which controls hundreds of IKEA stores around the world. “Our first IKEA Festival will be our biggest global home tour yet and will bring people together around life at home in a new way, both online and in our stores, and will be the beginning of a longer-term movement of real homes and real lives.”

Add IKEA Festival to your calendar here, which is also where the event will stream on September 16th.