Inside Bass Canyon 2021, Excision’s Triumphant Return to the Gorge 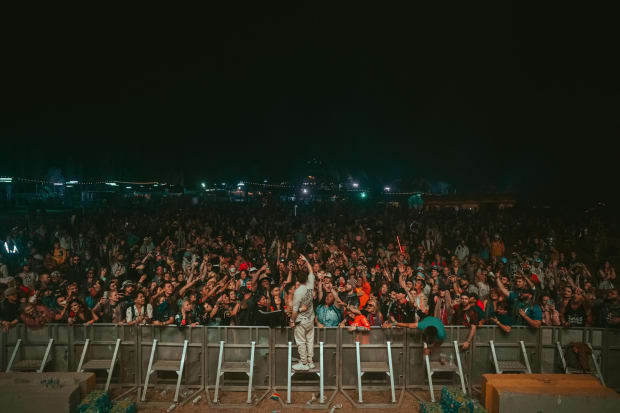 Excision’s Gorge homecoming was a much-needed reunion for bassheads—camping and weather issues aside.

After a year-long wait, Excision was finally able to reunite bassheads at the Gorge Amphitheatre for the first time in over a year.

Bass Canyon was the first electronic music festival back at the Gorge Amphitheatre, rekindling the flame that had been dwindling in the Pacific Northwest since the nationwide quarantine first began in March 2020. Fans, Excision, and his team were elated to return to the Gorge, where they curated their best iteration of the festival yet.

Although the festival opened with a messy camping situation, the entirety of Bass Canyon felt like a return to form for Excision, his team, and the Pacific Northwest electronic music scene as a whole.

Excision’s brand new Evolution stage graced the Gorge for the first time, turning what was already an unbelievable setup into a sight to behold. His three sets were filled to the brim with energy per usual, though they felt a bit more sentimental this time around as he was finally able to reunite fans for a breathtaking experience. The overall energy of the festival was top-notch, something Excision and his fans have dreamed of since Bass Canyon was delayed last year.

Rarely does a festival go off without a hitch and this year was no exception for Bass Canyon. The Gorge Amphitheatre staff was underprepared for the return of eager campers, resulting in hopeful attendees waiting in camping check-in lines for five hours late into the night.

While at most festivals this would simply be an inconvenience, the Gorge requires the pre-party to take place inside the venue and Excision’s team is required to pay for entry. Thus, many were unable to take part in the pre-party.

It’s important to note that this issue was outside of Excision’s control and he took the necessary steps to rectify the situation. Those who were unable to attend the pre-party due to the unusually long camping lines were offered a refund. Those who have yet to receive or apply for a refund should follow the instructions in the tweet below.

In years past, Bass Canyon has featured all of its headlining talents at a single stage while local talent played on a much smaller setup near the festival entrance. This year, however, welcomed change. The Evolution stage is where the Paradox once was, while the latter was placed at the Hilltop stage. The local stage, hosted by White Rabbit Group, was erected in the center of the venue and allowed atendees to catch all three stages on their way to the pit.

The Hilltop stage hosted some of the most diverse sets of the festival. INZO, Blanke, Downlink, Dieselboy, Hex Cougar, and more shook up the formula, straying from the roaring dubstep sounds Bass Canyon attendees are accustomed to and playing out a myriad of different genres. The local stage was a gem, as PNW favorites like Blood Klotz, Weird Waifu, baskets, AKOMA, and more kept things moving late into the night.

As many longtime Gorge Amphitheatre attendees know, inclement weather can completely derail a festival at a moment’s notice. This year, thankfully, the weather was only a minor inconvenience. While Day 1 had no issues and Day 2 was only hit with an hour of rain, the wind on Day 3 shut the festival down for a few hours. This led to delays and ultimately shorter sets for the majority of artists who performed on Sunday.

In years past, the timing of Bass Canyon has prevented any serious weather-related issues. There’s always a chance of smoke from the growing wildfire threat in Washington, but the fires have always managed to end or begin after the festival. Future iterations could potentially suffer from this issue, though it’s a risk most are aware of when booking events at the Gorge.

Since first launching Lost Lands in 2017, Excision has reinforced his reputation as a formidable festival proprietor. Both Lost Lands and Bass Canyon have become headbanger havens, attracting artists and fans from around the globe. Coming off delays of both festivals and his tour, he delivered the best edition of Bass Canyon we’ve seen yet.

If you weren’t able to attend the last three years of Bass Canyon, do yourself a favor and ensure you make it out next year. Not only does Bass Canyon present you with the opportunity to camp at one of the most scenic venues in the world, but the selection of music and community are always the cream of the crop.

And if you do attend in the future, make sure to let your friends know if you plan to disappear.