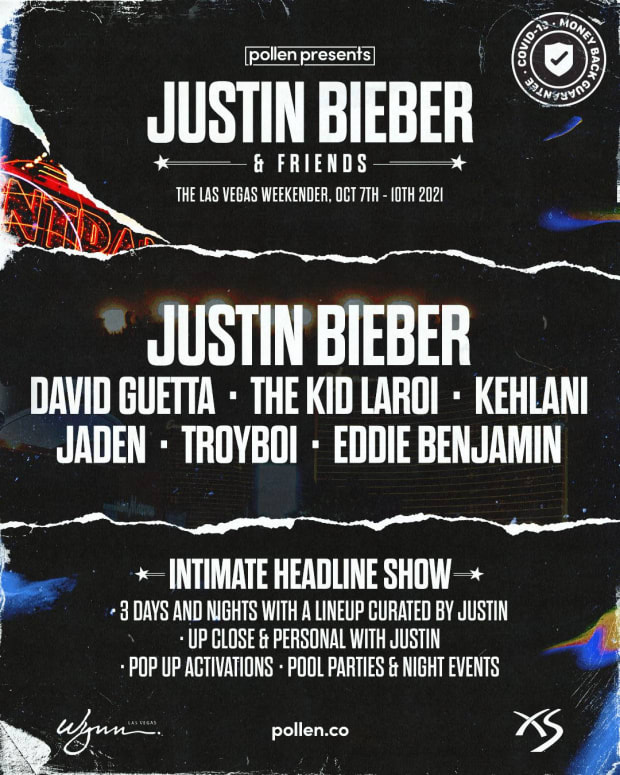 The Biebs and an entourage of artists are set to hit Sin City for a weekend to remember.

The Biebs has announced a Vegas weekender dubbed “Justin Bieber & Friends.” Scheduled for October 7-10, the experience, which will consist of shows and events curated by Bieber himself, will take place at the Wynn’s Encore Beach and XS clubs and conclude with a headlining performance at the latter.

Bieber, who has long championed dance music, has called on David Guetta and TroyBoi to throw down what promises to be two of the weekend’s most electrifying sets. According to a press release, more artists will soon be announced. There’s no doubt fans will be clamoring for the addition of Skrillex, considering the two reunited for a brand new single dropping tomorrow at midnight.

EDM fans will surely remember TroyBoi’s breathtaking feature on Bieber’s Justice cut “Redeye,” a highlight in the trap music virtuoso’s career. Guetta and Bieber, on the other hand, joined forces back in 2017 on the dance-pop single “2U,” which appeared on the former’s seventh studio album, 7.

The Biebs has also recruited a hodgepodge of artists from across the contemporary music spectrum, tapping Kehlani, The Kid LAROI, Jaden Smith, and Eddie Benjamin to perform throughout weekend. In addition to the musical performances, attendees will be able to visit a special skate park takeover on October 9th, which will include iconic skateboarder Nyjah Huston, among other athletes.

You can purchase tickets and packages here.