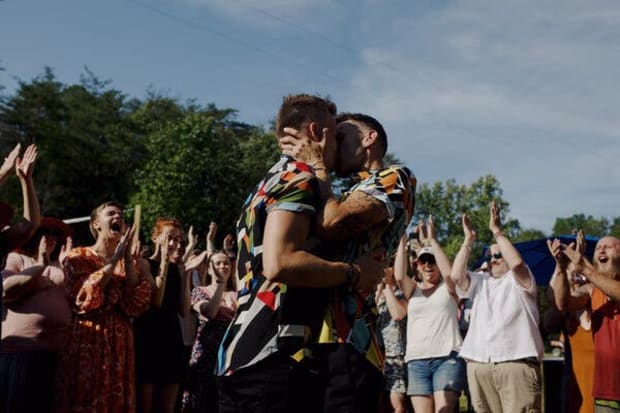 Pulling off Wonder Woods was a feat of epic proportions.

Planning a wedding is ambitious enough. Now imagine a wedding crossed with a camping music festival.

That is precisely what Jamon Deaver and Joey Lawton were able to pull off in Berea, Kentucky. The couple held their event, titled Wonder Woods, on a 40-acre plot owned by Deaver’s family.

At first, they expected the idea would be a hard sell. Preparing for pushback, the couple prepared by crafting a pitch deck and formal presentation for Deaver’s family, but in the end they didn’t hesitate to go along with it. “They were 100 percent in from the first second,” Deaver recalled.

A story published by the The New York Times notes the couple brought 230 guests to the property and 125 of them camped for two nights. Together, they built a stage and DJ booth where a wide-ranging list of performers played throughout the weekend, including folk band Zoe Speaks, songwriter duo Robin Alice of Pitch Perfect fame, American Idol finalist Rayvon Owen, and DJs Matt Suave and Megan Taylor. Taylor’s set saw Deaver and Lawton share their official first dance to Silk City and Dua Lipa‘s “Electricity.”

From live mural paintings to creative crafting classes, this wedding featured every extracurricular activity one could ask for at a music festival. The couple had a variety of caterers providing food throughout the weekend and even some food trucks parked on the property. It was an activity-filled weekend that included volleyball, frisbee, and water sports on Cedar Moon Lake.

Overall, the unique idea proved to be a massive success, illuminated by the many testimonials from guests. “There was something that felt really special about how much everybody wanted to rally around these people,” Australian singer Betty Who said. “I was like, ‘I don’t even know these people and I’m sobbing.'”