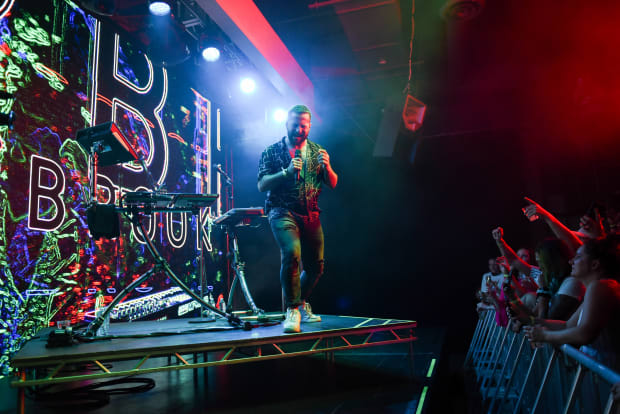 The popular electronica artist jam-packed fan-favorite tunes and drum breaks into his brief yet electrifying 40 minutes on stage.

Dance musician Elderbrook emerged as somewhat of a dark horse in the electronic scene, popping into prominence in 2018 following a Grammy nod for his hit single “Cola” with CamelPhat. Later came his show-stopping debut album, Why Do We Shake In The Cold, which was released to critical acclaim and devotee fanfare. This is the project that solidified the versatile vocalist, songwriter and producer’s status as a go-to for bright, jam-ready music that will have you singing in your feels faster than you can say play.

Elderbrook most recently made his way to Chicago’s Lollapalooza for a pair of shows primed to pull some of the weekend’s biggest audiences, relative to their stages and slots. To check out the buzz first hand, we made our way to Wicker Park’s Chop Shop on Sunday, August 1st for Elderbrook’s nearly sold-out aftershow. He was met with notably high expectations—Elderbrook received an Honorable Mention on EDM.com‘s “Best of 2020: Performances” list for last September’s “Live from the Aquarium” set.

Appearing with an explosion of colorful visuals and smoggy lights, Elderbrook took straight to the stage, having forgone an opener. He instead rolled right into a live, back-to-back arrangement of his most popular songs. A blend of upbeat, singalong moments and more quiet vocal solos rounded out the performance, which included renditions of “Talking,” “Numb” and “Why Do We Shake In The Cold.”

On the other hand, his set just barely creeped over the 40-minute mark. Lollapalooza’s aftershows had gone as late as 4AM on previous days, and fans had undoubtedly prepared themselves for a long night. There was even discussion of moving venues to attend other concerts—Marc Rebillet, Princess Nokia and Freddie Gibbs were among Sunday’s other performers.

Still, with his larger-than-life stage presence and infectious passion for music, it’s clear Elderbrook has mastered the art of performance. It’s a rare talent for oft-introverted electronic artists, who tend to remain behind the decks for the majority of their time on stage. Instead, Elderbrook shifted seamlessly between his live elements, engaging his audience with improvisation and impassioned dance moves. The crowd was hypnotically hooked from start to finish.

Check out our full photo gallery below.

View the 11 images of this gallery on the original article