Lights, Lasers and Love: A Look Inside “GRiZMAS In July” 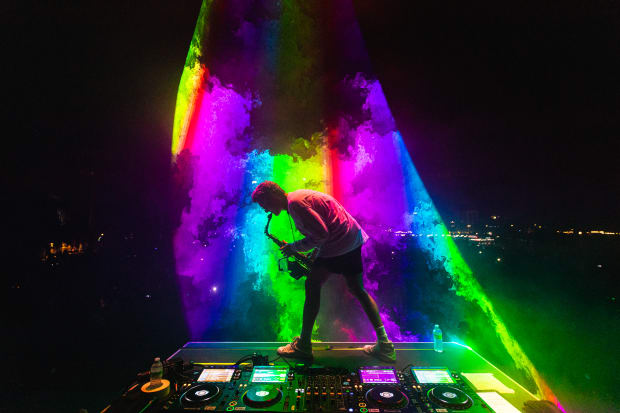 Despite battling bad weather, the event drew nearly 15,000 attendees across its three days.

With his steady release schedule and special show runs, GRiZ is truly the gift that keeps on giving.

His latest series of concerts, the sold out “GRiZMAS in July,” proved no different, bringing jovial spirit to the shores of Wilmington, North Carolina from July 30th to August 1st. The event first touched down for two nights at Live Oak Bank Pavilion before heading to the beach for a daytime pop-up on the 1st.

Marking the occasion were several unique sets from the beloved bass music artist, who released his seventh studio album, Rainbow Brain, in late July. Every sound in his repertoire, from deep throwback cuts and wobbly riddim to headbanging bass and soaring saxophone solos, made an appearance, making the experience truly one-of-a-kind. EAZYBAKED, Kilamanzego and Gilligan Moss also appeared as openers.

GRiZ in particular is known for curating a special kind of energy at his events, and in the case of “GRiZMAS in July,” even the bartenders were feeling the love. “It is without a doubt a show I would work again and honestly, I’d love to attend one as a guest too,” one wrote on social media. “This crowd was so happy, respectful, patient, kind and clean.”

You can relive the magic of “GRiZMAS in July” below with photos by Garrett Poulous.