HARD Summer 2021: Here are the Highlights of the SoCal Music Festival’s Return 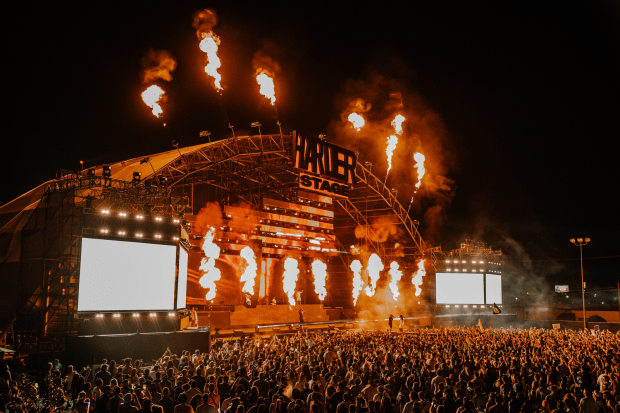 With over six stages, dazzling light displays, a glowing ferris wheel, and colorful decor throughout the venue, the festival felt like a smaller EDC.

After two years, HARD Summer brought over 160,000 ravers back together for a weekend full of electronic music and long-awaited fun.

With over six stages, dazzling light displays, and a giant glowing ferris wheel, the festival felt like a smaller EDC. Fans gathered like moths to the bright and vibrant lights, and the energy was palpable after over a year in isolation for most.

San Bernardino temperatures hovered around 100°, but thankfully Insomniac provided copious free water stations, shady, grassy areas and misting stations for their festival-goers to cool down. The hydrating drink of the weekend was Liquid Death. Contrary to its aggressive name, it was just water, the idea being to “murder your thirst” and save the earth with their plastic-free recyclable cans.

Insomniac’s production chops shined with its stages and pyrotechnics. Fireworks and flames enriched the performances, adding a whole other layer of thrill to the weekend. Lasers, fog machines, and intricate background visuals stimulated the crowd, and the impeccable sound quality was impressive to say the least.

The Hard Stage was the festival’s mainstage, with colossal acts like Future, 2 Chainz, and DJ Snake and Malaa gracing the arena. The decked out VIP area contained multiple food vendors, bars, and cabanas, as well as two large pools reminiscent of a Vegas pool party.

Appearing at the Harder Stage were a variety of house and bass artists, including Kayzo, Dombresky, Nitti Gritti and Wuki, and REZZ. Serving the bass music crowd, the Green Stage featured Virtual Riot, Blunts & Blondes, and a massive old-school dubstep set from Skream, among others. While the Purple Stage boasted a diverse lineup from Kaytranada and Elohim to Don Toliver, Rubi Rose, and iann dior, the Pink Stage showcased house artists like Noizu, Lee Foss, Walker & Royce, and Solardo.

Not included in the official set times, the Corona Electric Beach Tent was a wonderful surprise with its sand pit flooring, beachy feel, and intimate space for artists like Wax Motif, Born Dirty, Nitti Gritti, and The Fish Scale. The space felt as if it had teleported its crowd from HARD Summer to some tropical paradise near the equator.

If you were wondering what a festival in 2021 would look like, HARD Summer was it, thanks to the event’s free vaccination station. In the midst of the rise in Delta variant cases, Insomniac also set up sanitation stations and offered free masks to the masses.

Offering Moderna, Pfizer, and Johnson & Johnson to attendees, organizers recruited pharmacists to administer shots to anyone who needed it. While she couldn’t give an exact number of doses administered, Quynh Borkenhagen, the pharmacist running the free COVID-19 vaccine tent, told the LA Times that “it exceeded my expectations.”

Ask anyone who has been to an Insomniac festival, and they will probably tell you that the shuttle situation wasn’t pretty. Sadly, the shuttles for HARD Summer were no different.

Ready to head home and get some much needed rest, ravers lined up for their shuttle home. Little did they know, they were facing hours of wait time. With little guidance from staff, the crowd turned into somewhat of an angry mob. Chaos ensued, with people pushing and shoving their way through the line—if you could call it that. We’re no event organizer, but there has to be a better system.

All in all, the event was a major success and boosted the morale of the thousands of ravers who attended. Strolling through the HARD Summer, it felt surreal to see the energetic dancing, positive connections, incredible fashion, and blissfull celebrations that these events are all about.