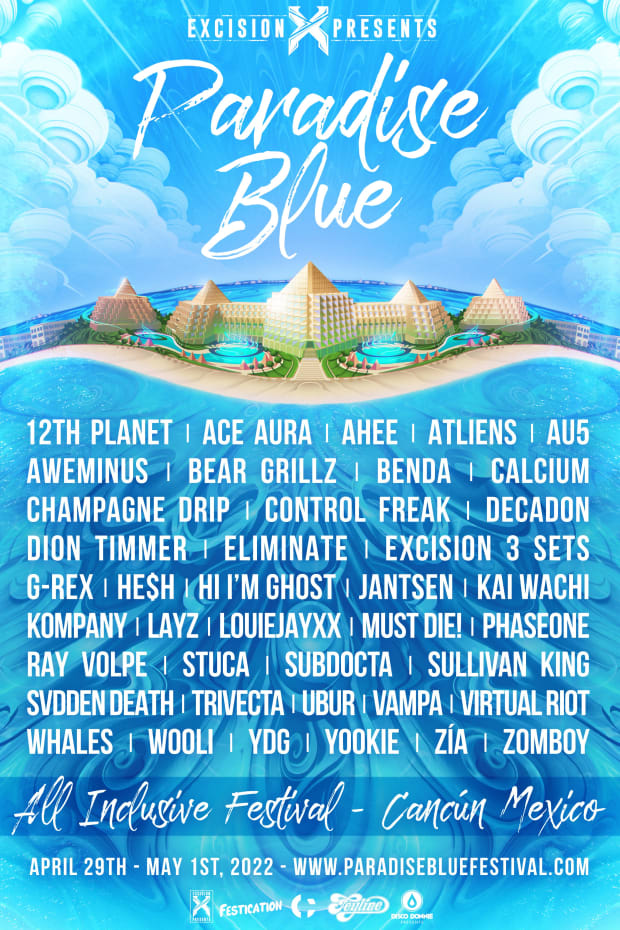 The inaugural Paradise Blue festival will feature performances by Zomboy, Virtual Riot, 12th Planet, and three sets from Excision himself.

Excision has announced a brand new destination music festival, which the dubstep icon has likened to a “headbanger’s paradise.”

Excision’s first-ever destination music festival, Paradise Blue invites dubstep fans to the idyllic beaches of Cancún, Mexico, where they’ll be able to kick up some sand and rage to heavy-hitting performances from a who’s who of the finest in bass music. Primed for DJ sets at the inaugural fest are Zomboy, Virtual Riot, 12th Planet, Eliminate, SVDDEN DEATH, and ATLiens, among others.

While the festival’s lineup is impressive, its pièce de résistance lies in its founder. Excision will perform three unique sets—yes, three—at Paradise Blue, which is scheduled for April 29th to May 1st, 2022.

The three-day festival will take over Cancún’s Marriott Resort and all-inclusive Four-Diamond Paradisus Resort, which offers lagoon-inspired pools and a breathtaking oceanfront layout. According to the event’s website, Paradise Blue will include multiple stages and a mainstage directly on the beach.

“Taking over part of a truly beautiful place like Cancún with so many insane Bass Music artists is going to be an epic experience I can’t wait to share with all of you! I’ve always loved exploring new places where Headbangers from around the world can come together to unleash their inner selves,” Excision said in a statement. “This one will be truly special.”

In the event that Paradise Blue is canceled for any reason, such as the impact of COVID-19, ticket-holders will be issued a full refund. If organizers reschedule the festival, passes will be eligible for the new dates.