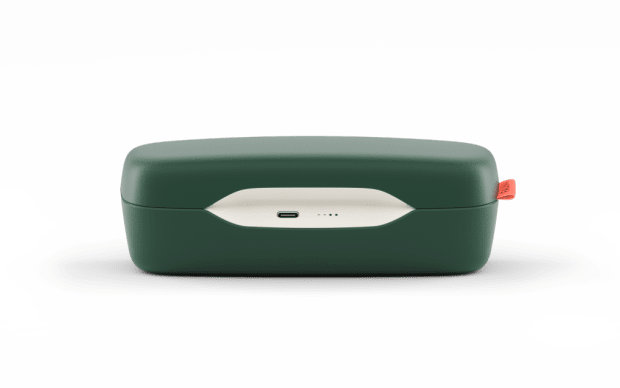 Fauna’s innovative wearables are complete with two microphones, a touchpad, and a built-in sub-woofer.

With two microphones, a touchpad, and a built-in woofer, Fauna‘s new audio glasses belong in a Kingsman film.

The new wearable allows you to listen to music and take hands-free calls by connecting via Bluetooth to its fitted speakers, which are housed in the frame. However, unlike other audio glasses on the market, Fauna’s are not bulky or awkward-looking despite cutting-edge tech specs.

Style has always been an elusive holy grail for products at the bleeding edge of the wearable technology space, but Fauna’s glasses are elegant. They also come in a sleek charging case, which contains a USB-C port, integrated power bank, and a tiny row of LED lights displaying battery life. They can be used for up to four hours on a single charge, so they’re perfect for marathon runners—or frequent DMV visitors.

Powered by USound’s one-of-a-kind MEMS technology, the built-in audio is clean and concise, offering crisp sound at eye level. However, don’t expect to play bangers and feel bass ripple through your body. The glasses were clearly not built for audiophiles and music producers so if you’re trying to create beats with them, you’ll have serious buyer’s remorse.

Fauna’s audio glasses are more appropriate for those looking for casual, on-the-go listening and hands-free calling. They eliminate the need for prickly in-ear buds and oversized, clumsy wired headphones, and sound bleeding isn’t an issue. Someone within a few feet will not be able to hear the audio unless it’s slammed to its maximum levels, which you won’t be doing unless you walk by a busy construction site or car alarm.

In addition the glasses, Fauna offers a mobile app focused on mindfulness and stress relief. Users are able to schedule audio reminders, or “Whistles,” which are pinged through the wearable as prompts for everyday imperatives like drinking water or fixing posture. The app also contains its own voice assistant, similar to Apple’s Siri or Amazon’s Alexa.

You can read more about the innovative glasses and purchase a pair here.