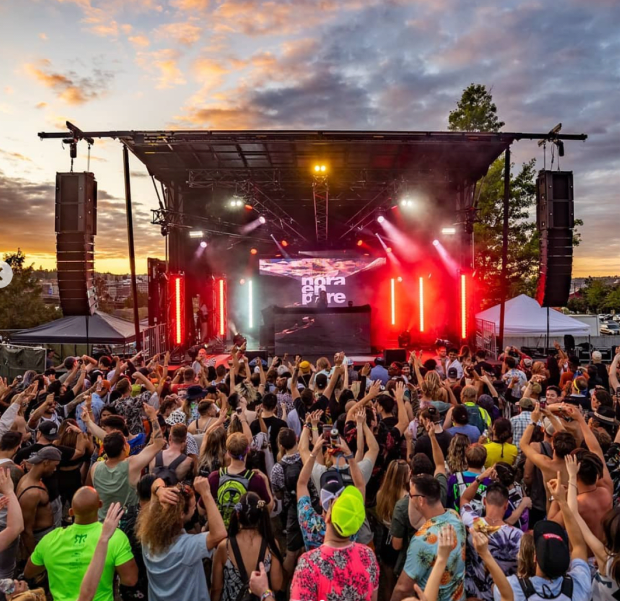 My eyes were fixated on the Tacoma skyline as I lay on the sharp, prickly grass below the only shaded structure in the venue. Gazing out into the horizon, a silhouette of high rises framed the lonesome stage that would be the focus of the evening.

Grappled by my surroundings, I was unaware of the impromptu game of Duck, Duck, Goose that had attendees cheering for the winner as she slid down to the ground. Nor was I aware of the spontaneous crowd that rose from the field to partake in a yoga session.

All throughout the venue, mini beehives of activity sprung up, all in high spirits, waiting for the reverberation of the speakers to pull them to the dancefloor. Over an hour later, the crowd cheered on as the music finally returned to Haub Family Field.

These unplanned activities took over a sizable chunk of day two of the inaugural Fresh Pressed festival. Spearheaded by LED Presents and The White Rabbit Group, the second day of the event got off to a rocky start after a generator malfunction forced the music to stop in the middle of Frida K’s opening set.

The two-day event was the first major outdoor festival in Washington State following the pandemic and event producers hoped to attract partygoers from across the Pacific Northwest. Infrastructure was an afterthought, as the small-scale event relied on talent to keep revelers in high spirits.

On Saturday, the day came alive with the familiar sounds of house music once again gracing the city of Tacoma. Bookended by Johnny Monsoon and Nora En Pure, sundrenched festivalgoers danced along to the sounds of SNBRN, Whethan, EDX, Blossom, and Dirtybird co-founder Justin Jay.

Once the technical glitch was mended, attendees basked in another day of sunshine in the final hours of Fresh Pressed. The generator failure not only meant that Frida K’s set was cut short, but it also eliminated Nala’s performance altogether. Being the good sport that he is, Steve Darko went back-to-back with Nala, who was scheduled to perform after her. The evening closed out with Dombresky, Yung Bae, Will Clarke, and Dirtybird label head Claude VonStroke.

No strangers to the scene, White Rabbit Group and LED Presents managed to strike a balance of great music and good vibes in their inaugural Fresh Pressed. The event reaffirmed the love and commitment festival attendees have for music and community, even in times of technical glitches.