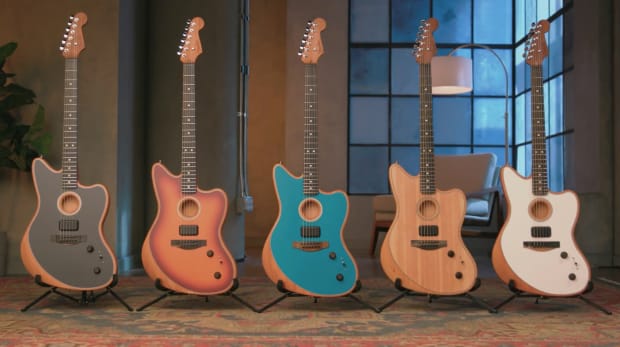 The future of guitars is here and it’s called the American Acoustasonic Jazzmaster.

Fender’s latest in their Acoustasonic series may look like their classic 1960s Stratocaster on the outside, but it’s far from just any electric guitar.

Offering a wide variety of both electric and acoustic sounds, the hybrid unit is the ultimate guitar for electronic music artists like San Holo, Dabin or Sullivan King, who creatively utilize guitars both in the studio and during their performances.

What makes this guitar so special is that it’s the result of feedback from over 25,000 musicians who’ve used Acoustasonic guitars. With that in mind, it has a liberating form factor that makes the Acoustasonic Jazzmaster comfortable to play for any guitar player. However, its pièce de résistance is its striking design, which makes it a functional and powerful tool for artists across genres.

The body of the guitar is bigger than any other Acoustasonic model and—like they say—bigger is better. It pushes the most air and therefore has the most forward acoustic tone. That’s why it produces such a loud sound, even when it’s not plugged into an amp.

The guitar’s shape and body also directly affect the digital component within it, leading to the Acoustasonic Jazzmaster’s capability to produce immeasurable sound combinations. On the body itself, there’s a mod knob and voice switch that lets you choose whatever blend of sounds you’d like while also melding them in real-time.

View the 10 images of this gallery on the original article

When you set the mod knob to “A” or “B” you’ll get two different voice options. The voice switch above offers five voice pairs, which feature different sounds that you would normally hear from different acoustic and electric guitars. And to diversify those sounds even further, Fender added a humbucker feature so that you can play them clean or with distortion.

For those who love lo-fi music, options 2A and 2B offer a lo-fi piezoelectric effect and piezo crunch sound combination. But if you tweak the mod knob, you can blend it to create even more lo-fi elements than just those two settings.

And the sound possibilities don’t end there. The guitar’s compatibility with effects pedals opens it up to a bank of infinite sound combinations. Country music artist Shooter Jennings used the Acoustasonic Jazzmaster to record his latest record, encapsulating it with one simple analogy: “Every guitar is one crayon and that’s a crayon box.”

This seamless switch between different guitars also renders the model a go-to when performing live. Usually musicians carry multiple guitars on tour, and when they perform, you’ll see them interchange them between songs. But all the sounds they need are at their fingertips on the Acoustasonic Jazzmaster.

Indie-rock and electropop artist Vagabon usually switches between five different guitars on tour to offer her multi-genre performances. “For my songs it would often require it to go from very quiet fingerpicking to then picked to sound really overdriven and then to get even heavier,” she said, explaining the versatility of the Acoustasonic Jazzmaster. “I found how easily I could go across all my different types of music really seamlessly.”

It’s a little like how San Holo customizes his guitars so he can play multiple sounds live and in the studio without changing out his guitar. When interviewed by Fender back in 2019, the DJ and electronic music production virtuoso demonstrated how he modified his iconic surf green Fender Duo Sonic from the 1960s.

One of the modifications was getting rid of the pickup selectors above the strings and moving them to the volume and tone knobs. That way, when he goes all out while performing, he doesn’t hit into them and change the sound. He could also easily switch between the sounds he needs.

San Holo was definitely onto something, but Fender took the idea even further by making a whole new guitar category a reality. This historic innovation is the new one-man band of guitars and, for DJs and dance music producers, it will only help reach even greater heights of creativity while enabling them to keep up with the mercurial, genre-blending sounds of the EDM sphere.